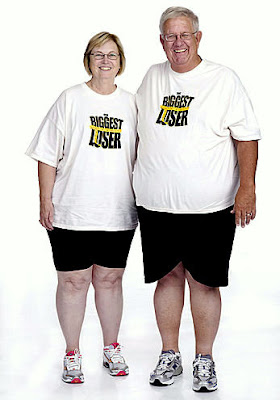 Last week, The Movara had the pleasure of hosting former Season 7 “Biggest Loser” contestants, and ‘At-Home Winner’, Jerry and his wife Estella Hayes. We ask all former “Biggest Loser” contestants who visit our resorts to speak to our guests regarding their experience on the show and their weight loss journey. Every presentation is inspiring, motivating, and heartfelt. Jerry and Estella’s presentation was no different.

Estella & Jerry Hayes (before)
If you missed their season let me give you the rundown. They walked onto the “Biggest Loser” Ranch in January of 2009 as the “White Team” and were, at that time, the OLDEST contestants (Jerry at 64 and Estella at 63 years of age) ever on the show. Estella weighed in at 242lbs and
was voted off week one; not returning until the finale. In her one week at the ranch Estella lost 9lbs. The remainder of her 74lb weight loss took place over eight months all from home. That’s right! The majority of her weight loss success took place at HOME- all on her own!

Jerry weighed in at 369lbs and was voted off week two, having lost a total of 26lbs on the ranch. During his first work-out session he passed out and was rushed to the hospital (it was frightening!). However, upon his return to the live finale in May 2009 Jerry had lost a total of 177lbs. That means he too lost the majority of his weight at home! 151lbs to be exact – making Jerry the ‘At-Home Winner’ of Season 7. 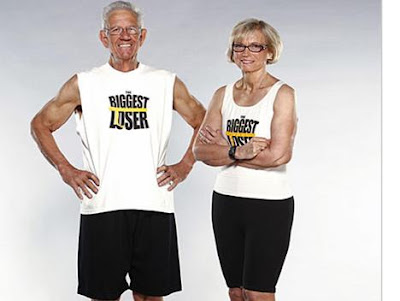 Jerry & Estella Hayes (after)
You’re probably thinking, sure Amanda, they did it all ‘alone.’ That of course, NBC paid for their trainers, nutritionists and everything else once they returned home. “Not true”, says Jerry and Estella. “We paid for our own personal training sessions, learned to cook our own healthy meals (and paid for all the groceries), and made it a priority to schedule time to work-out every day.”

Yes, they did it on their own, together! In the retirement bracket of ages, Jerry and Estella conquered the myth that they were ‘Too Old’ to lose weight. They overcame their health issues – high blood pressure, diabetes, high cholesterol, gout – and no longer live dependent on medication.

I find their story so inspiring because they are living proof that IT’S NEVER TOO LATE!!! Did you hear me?! It’s never too late to make a change. We all control our own destiny. You don’t need a television show to start making changes towards a healthy lifestyle.

Whenever I find myself making an excuse about something I ‘can’t do’, I will think of Jerry and Estella’s story. I will remember all that they have accomplished and overcome, and I will let their journey serve as a reminder that excuses won’t get me closer to my goals.

Now I ask you, what excuses have you made lately? Have you used your age or current health issues as an excuse NOT to work-out and make changes towards living a healthier lifestyle? If you have, remember Jerry and Estella Hayes. Remember how they overcame all adversity and succeeded in not allowing their age and poor health get in the way of living the life they knew they wanted and deserved. You too DESERVE to achieve your goals and dreams! So please, don’t let yourself get in the way of your own success.

For additional information on Jerry and Estella Hayes…
http://www.jerryandestellabiggestlosers.com/
http://bit.ly/s6uPan
Until next time,
Amanda

Battle of the Bulge