There is a lot of excitement in the air at the Utah resort this week. Not because tomorrow is Thanksgiving, though that is also exciting, but because we are filming a commercial!!

It has been really fun to have the cameras around, and for the guests to see what production is really like. There is SO MUCH that goes into making a movie, a television show, and even a commercial that you would never know until you experience it. Did you know that on while filming The Biggest Loser we would film 12 hours for ONE MINUTE of TV time?? Can you believe that? 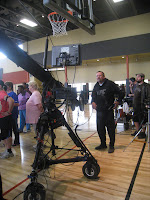 So that’s the buzz at Fitness Ridge, Ivins today! Lots of fun, but still LOTS of hard work. The guests have had to make up any workouts they missed from participating in the filming, and everyone has been more than willing to do it!